Main emphasis at the last delegates meeting attended by member associations of the Confederation of European Music Industries (CAFIM) held in Paris was on the reduction of Chinese import duties announced shortly before the meeting took place. President Antoine Beaussant and delegates assembled at the meeting warmly welcomed this step as a successful achievement resulting from continuous ongoing dialogue between representatives of the China Musical Instrument Association (CMIA) and CAFIM pursued in recent years. However, consensus prevailed that this could only be an initial move towards normalizing commercial relations and establishing fair trading conditions.

It was felt that efforts had to be made to ensure that duties on all musical instruments and appurtenant accessories were brought down to the low level stipulated by global free trade in line with the provisions laid down by the World Trade Organization (WTO).

In this context, the need was also expressed to sound out the actual size of the Chinese music market

IPR protection continues to assume growing importance in talks held with the Chinese Music Industry. This is endorsed by the fact that Chinese manufacturers themselves are meanwhile heavily affected so that sensitivity to this issue is becoming increasingly palpable.

This subject will be open for discussion at the Music China Expo due to take place in early October, the same applying to issues pertaining to certified logging of forestry produce, the avoidance of pollutants and the fixing of quality criteria for musical instruments.

The practice of origin-marking applied to musical instruments is showing results, this causing irritation not only in China and Europe, but elsewhere, as well. Regulation of this issue was considered to be in the interest of both markets and indeed on a global level.

What might possibly help in this respect is the “European Excellence” label, introduced by CAFIM back in 2006 or, for example, by propagating the Master Craftsman designation e.g. “Meister” and the “Made in Europe“ Certificate issued by the German Piano Manufacturers Association, further endorsed by the “Made in Germany“ quality attestation.

Issues pertaining to vocational training formed yet another item on the agenda.

In addition, it was regarded as important to set up a discussion group involving Chinese and European military band musicians.

Musical education continues to play a central role at all CAFIM delegates meetings, Paris proving no exception in that respect. Regrets were expressed at the restraint on musical education exercised at schools throughout Europe providing a general curriculum. The delegates intend to pull out all the stops in an effort to maintain the status quo, while aiming at appropriate expansion or a revival of musical education in school curricula.

Antoine Beaussant commented as follows: “The promotion of musical activity is of vast importance, not only to the Music Industry, but also to society as a whole both within and outside the EU – worldwide.” CAFIM members are in contact with representatives of the El Sistema musical education scheme that has come to enjoy conspicuous success in Venezuela and are exploring the scope of learning from this approach with a view to adopting certain features of this exceptional system.

The German “Music-in-the-Classroom” concept will be introduced to the Czech Ministry of Education in early October followed by a presentation of the scheme to colleagues of the China Musical Instrument Association and those involved in musical education at the German School in Shanghai.

The next meeting of CAFIM delegates with representatives of the Chinese Association CMIA will be held prior to the staging of the Music China Expo.

Further information may be had by contacting the CAFIM Head Office: 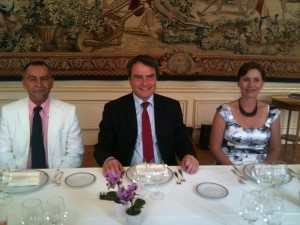